Them Bones of Adventuring XXVII - Short Procedure for Chases 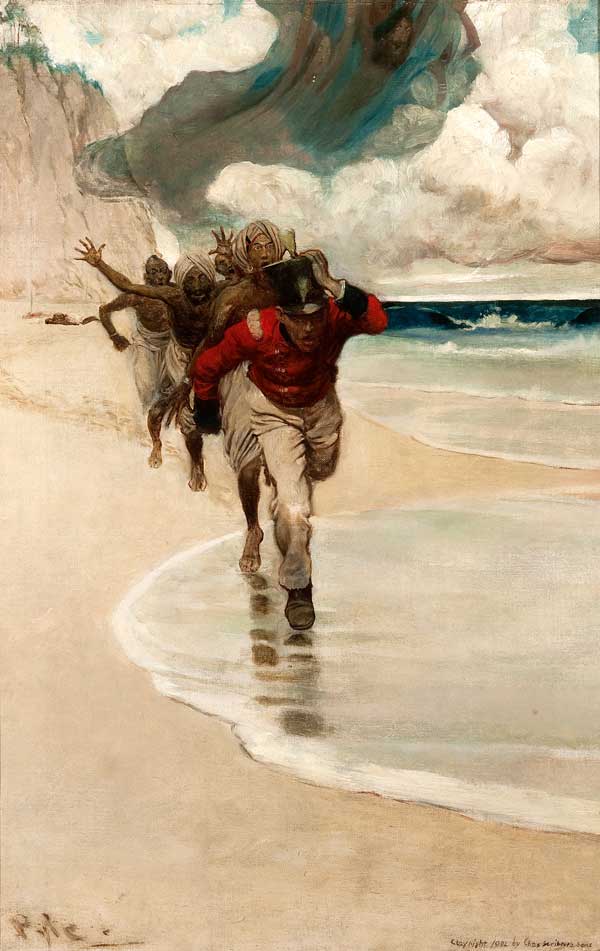 My bid for captaincy of HMS Obvious meets a new chapter, with yet another hat throw unto the ring of marginal mechanics. As the totally predictable follow-up to the topic on better parts of craveness here is a dustup on rules for chases.

From combats where the tide has ebbed low to the branching fortunes of the downheeled thief, chases should be infrequent but consequence-laden events, important enough so as to need rules detailing them. T’is already distasteful when the would-be heroes are forced into a hasty retreat but to then have them pursued really takes a slice. Tightly coiled along with the concept of morale for NPCs, chase rules are important to defuse acute afflictions of ‘fight to the death’ syndrome and allow the possibility for PC and NPC alike to extricate themselves from harm's way as well as the means for them to be chased and put down like the cowardly dogs that they are.

My previous draft didst turn out much too finicky as reiterated sums and subtractions of distance do not invite the kind of fast-paced resolution one aims to get from a chase. Just as with the revising of Stealth the slant has gone toward the mind’s eye and away from mapped situations as I’ve come to conceptualize chases less as neat yardstick measurings and eased into the minimalism of abstract uncertainty the better to represent those desperate bursts of blurred progress.

Design Constraints – On Group Checks and Rooting for the Little Man

Chases are presumed to deal with two parties moving at roughly the same speed, an assumption that doesn’t always square with the realities of play; Or ever, if one accounts for the shorter stature of some races or compares physically fit warriors and rogues to frail casters, to speak nothing of the vagaries of exhaustion and encumbrance.

One should also pause when conceiving of chases as an extended series of rolls as I’d been guilty of doing, considering that the more rolls are performed during a given contest the more normalized the results will become, accentuating the tendency for the stronger party to emerge victorious and thus defeat the purpose of rolling in the first place. Despite this seemingly pointing to the elegance of single roll resolution, I must dig the heels in the sand somewhat as the matter of chases do present a problematic Z-axis: the distance covered as the pursuit unfolds. This begets some drilldown as certain opportunities for player action and narration alike can present themselves as ground is treaded in a pursuit.

Finally come the classic pitfalls of having an “every man for his d20” situation, the variance of which will invariably doom at least one escapee to flat-footedness at the most inopportune of times, turning chases into a “which of us is gonna faceplant first” circling of the sarlacc pit. Whereas on stealth I’m the first to posit individual checks in accordance with a principle of niche protection the same thinking doesn’t quite hold when applied to chases being that there is no class whose primary field of competence consists in running away the fastest.

The procedure should thus:

- Be a group check that doesn’t totally obliterate the chances of underperforming cogs in the fleeing machine (this having been done at the outset by adopting 5E’s decidedly forgiving movement rates for those shorter of stride).

- Key off of movement rate alone, given that creatures in AD&D boast abridged statistics.

- Allow a quantum of player input beyond the algorithmic. Painting chases as rich with pondered decision-taking doubtlessly casts them in a false light as people running for dear life at lung ejecting pace tend to rely on little past their gut flora for decisions but it is to be assumed the tomatoes are halfway set to ‘pulp’ over here.

In sum, this is out to champion the view that chases should either be short and sweet or short and sour, the short bit being the one that’s actually important, with the possibility of running away to be regarded mostly as something to be prepared for in advance, parties needing to be mindful of their weight distribution and gear loadout while exploring (including what can realistically be discarded at a moment’s notice) if they wish to keep their options open should an unsurmountable challenge be encountered. 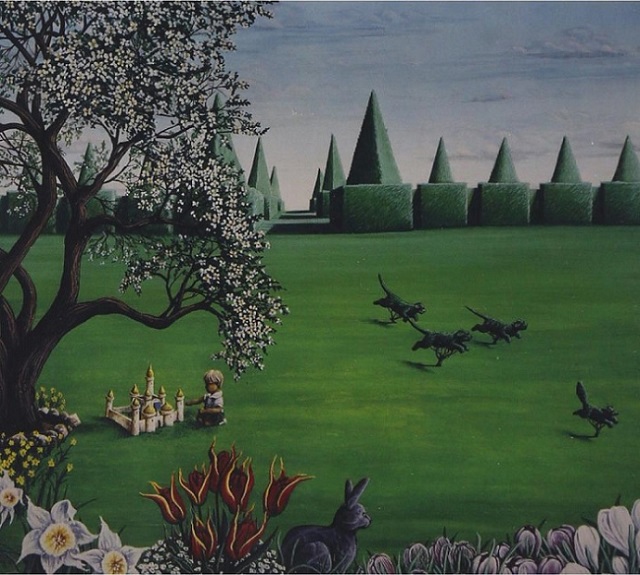 As an encounter evolves into a chase determine the procedure’s adjustment and roll on the following table until one of the two obvious results is made manifest.

Chase Roll Modifier: this number is mostly fixed for the procedure’s duration, changing only if one of the reference characters is switched or otherwise gains or loses speed, be it from shed equipment, magic item activation or some other circumstance
·      Speed Difference: the roll receives an 1-point adjustment for every 20’ difference in movement rate      between the fastest pursuer and the slowest fugitive, the adjustment being negative if the pursuer is          faster and positive if the comparison favours the quarry.

o   A character who breaks into a run quadruples his movement rate per round, as determined from his speed adjusted for encumbrance and exhaustion

·       Initial distance between parties: a d6 is added to the roll for every six units of encounter distance (60 feet in the dungeon, 60 yards in the wilderness, etc.). The roll is then made using the highest two results. Every round beyond the first will remove one of the extra dice as distance is closed

·      Unwieldy Groups: once a side exceeds 10 elements then for every time it outnumbers the opposing group the pursuit roll is adjusted by 1 in favour of the smaller party

Space Traversed – this keys off the main roll and will vary according to the environment in which the chase takes place:

Sometimes a chase may have a conditional escape condition set into it requiring nothing but keeping up the pursuit without getting caught – ‘if a sallying party can make it back through the drawbridge, they’re in the clear’ – for which the distance can be an important factor to keep in mind.

Actions during the chase – between rolls, characters may be presented with the chance for minor or movement-related actions other than negotiating direct obstacles, as allowed by the surrounding environment, be it attempts to hide, splitting the chase (whipping up a parallel procedure), shedding equipment to alleviate encumbrance or setting up obstacles for pursuers. Ranged attacks or spells are generally not possible, hit-and-run tactics requiring iterated use of the procedure (meaning a successful escape for every missile discharge).

Random Encounters – when in places subject to random encounters a check is prompted every time a double is rolled, to account for the noise and distance covered.

Note that a successful escape will by no means represent the end of a party’s woes in a closed environment such as a dungeon but often merely a reprieve from immediate danger unless it be followed by further distancing efforts from its source.

Everything proposed above is of course highly abstracted but past the basic elements of the act itself, a protracted chase – especially one in an urban environment – should get its flavour from the finishing point and whatever is encountered along the way. In this the early editions leave anything past the dry procedure to the individual ref’s discretion whereas 5E offers up a few toothless random tables of mishaps. Both approaches miss the mark, in that a chase needs decision points for player input (and it’s rather difficult to produce instances that are not ultimately reducible to the PCs making a blind choice) and a background reel that will provide some sort of context and avoid the whole thing coming off as an asseptic exercise in dice rolling.

This problem can be tackled by descriptive abstraction (embracing minimalism), explicit mapping (urbancrawling), pre-planned chase setpieces, emergent accrual of details through random tables or simply wholesale improvisation. I don’t as yet particularly lean in favour of any approach and have a strong suspicion that the answer could lie in an outright mixture of all of the above as dictated by the rythm demands of the running to keep things fresh, avoid the polyhedral tug-of-war and allow for setting arabesques to crop up. 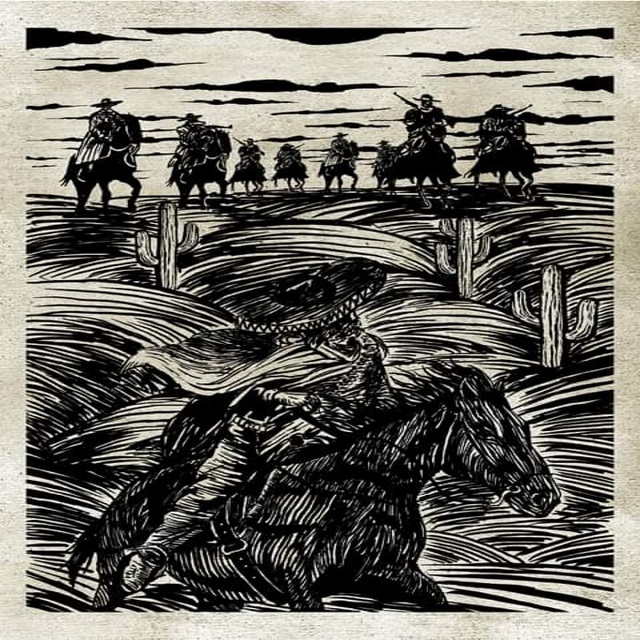 Drain
I'm a neophyte DM who got hooked on the game unwittingly after spending years deriding it. So there, joke's already on me to begin with.

Thoughts that inform my thinking